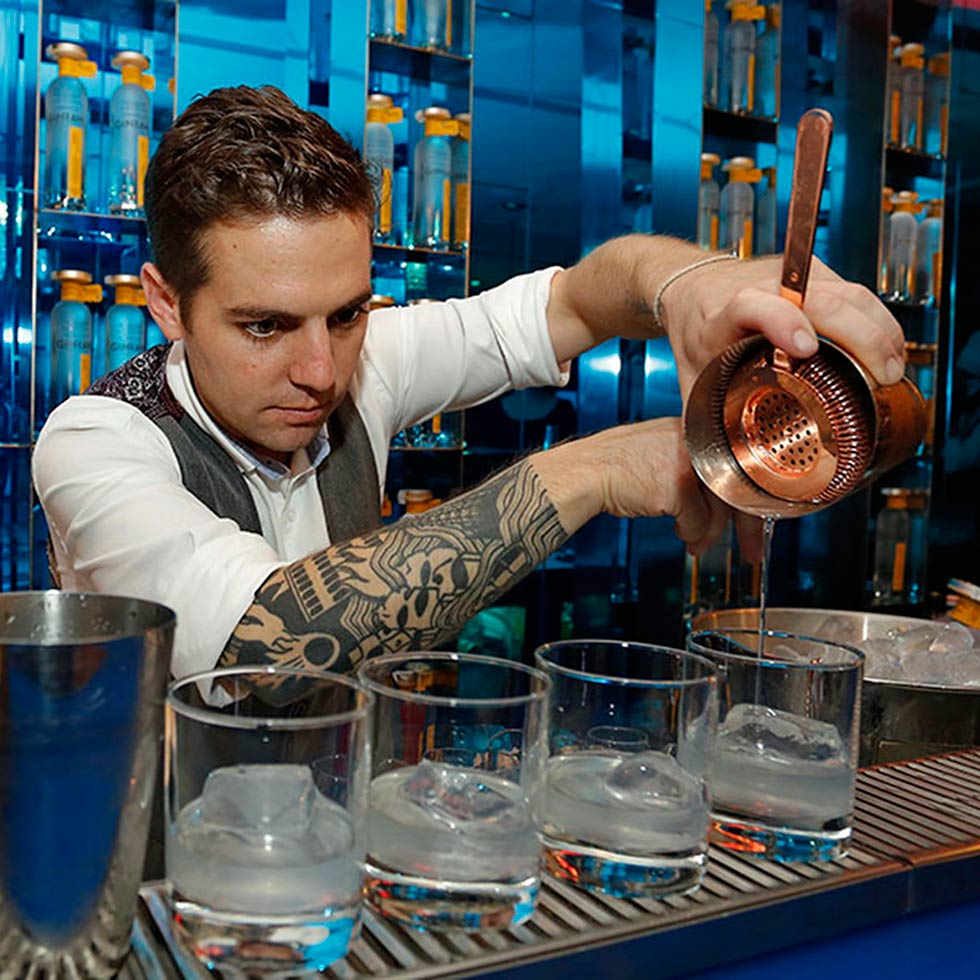 Much more than a Barcelona cocktail workshop.

The Liquid Journey is much more than a few cocktail suggestions from Diego Baud. It’s an experience; a true voyage through the senses, full of pleasure and imagination, in which the prestigious Head Mixologist of Hotel Arts Barcelona shares his passion and enthusiasm with attendees while revealing the keys to preparing his famous drinks at home. It’s undoubtedly the best Barcelona cocktail masterclass, and one of the most delicious evenings you can enjoy in the city.

So sit back, relax, and prepare your taste buds for a thrill… the Liquid Journey is about to begin!

Diego warmly welcomes us to an exceptional venue:  the exclusive chef’s table at the elegant Arola restaurant, which has been transformed into a creative laboratory, complete with ingredients, spices, spirits, cocktail accessories and specialized books. From there you’ll have a close-up view of the restaurant’s impressive open kitchen. As Diego himself will tell you, the first ones to try his cocktails are usually the excellent chefs who work there, whose expert palates—with a taste for luxury—qualify them to contribute their ideas, expertise and talent to Diego’s liquid creations. “One team, one dream,” he says proudly when speaking about them

Be amazed by the creative snacks at the Arola Restaurant at Hotel Arts.

The meteoric rise of this mixologist, born in Colorado, United States, has not gone unnoticed by leading experts in the world of Barcelona cocktail bars and the global bartending community. “It happened very fast,” he explains. He started like so many others interested in cocktails—first with the classics: the martini, the margarita, the cosmopolitan… and from there he set out to experiment with new flavors and combinations, guided by curiosity and the good sense to listen and learn from the experts he worked with every day. The definitive leap in his career came in 2015 when he was crowned as the best bartender of bourbon distillates at “the Essence Century Cocktails Competition”. Now one of the top mixologists in Spain, he continues to enjoy each day as if it were his first, interacting with his clients through experiences like the Liquid Journey. It turns out, the best things taste even better when they’re explained right in front of you.

A pure soul makes for an unforgettable combination

For Diego, the ritual of drinking a cocktail is a way to stop the world, slow down the pace of life, and take time to enjoy the best that nature has to offer Whenever he can, he works with fresh, sustainable and organic ingredients which he mixes with the best spirits on the market. He argues that it’s the bartender’s responsibility to advocate for the use of good liquor, just as sommeliers do with wine—so of course he begins tonight’s Liquid Journey by offering us a taste of one of his favorite gins. GinRaw is distilled locally using the latest culinary techniques. Its recipe is the result of a collaboration between a mixologist, a chef, a sommelier and a perfumer, all of whom are at the top of their fields. In Diego’s words, both the flavor and the concept are very Barcelona, and I like to help guests discover things that they can’t find in their home countries.”

If you want to enjoy the best that nature offers, visit 43 The Spa.

Honey B: an environmentally conscious cocktail

Today’scocktail masterclass starts with a mixed drink with a base of Don Julio, an aged and elegant tequila that’s combined perfectly with the dry, calming notes of chamomile tea, which he prepared himself in Arola’s kitchen. The sweetness comes from honey, which is the star ingredient. A little bit of fresh lime juice adds it a touch of acidity while egg whites deliver a smooth and creamy texture, and a final few drops of Mexican mole essence give it a distinctive bitterness that creates an interesting play of flavors on the palate. Diego then rattles the cocktail shaker over his shoulder with the kind of extreme concentration you would expect from someone who takes his job very seriously. When it’s time to serve the drink, his expression turns even more focused as he creates an elegant and playful presentation with great attention to detail, adorning the glass with balls of pollen and decorative bees that seem to fly above it. Each of his creations has a message; with this one he wants to raise awareness about the abrupt disappearance of these pollinators which are vital for biodiversity. As Diego puts it, “without the bees, this cocktail could not be.”

Abuelo Mojito: reinventing classic cocktails in the city of Barcelona

When Diego first arrived at the Arola bar he was surprised by how many mojitos the guests and visitors ordered. In his efforts to be the best bartender possible Diego takes all of his customers into consideration, so he decided to include this classic cocktail on the menu, but not without giving it his own spin. Then, the Abuelo Mojito was born, an innovative take on an old Cuban recipe that owes its unique character to an infusion of dry and fresh mint, both products of the many gardens surrounding the Arola terrace.  The refreshing infusion is served in a traditional mate cup, like those used in some South American countries to drink tea. Another pleasant surprise that won’t go unnoticed is the absence of sugar, which Diego substitutes with the creamy sweetness of chamomile-infused honey to create a lighter, healthier drink. He adds a bit of lime juice, a touch of soda water, a sprig of fresh mint and voilà! This cocktail is so relaxing it needs its own chair.

Another one of his star drinks on warm nights—a perfect Barcelona cocktail—is the famous “Dancing with Almonds.” The name is inspired by what Diego said when he first experienced the combination of its two main flavors: “They dance beautifully together!” It starts with Ketel One, a premium Dutch vodka which is made by distilling wheat grain a total of five times. It’s accompanied by creamy almond liqueur and strawberry juice, which lends it sweetness as well as a nice texture after shaking. Diego’s expressive hands add a last touch of lime, resulting in a cocktail that’s not only delicious, but also has one of the most amazing presentations in his repertoire. One of the distinctive traits of the young Arola cocktail mixologist is his boundless creativity when designing the presentations of his cocktails; they’re true odes to imagination, featuring props, flowers and all kinds of different materials. Dancing with Almonds is served inside a beautiful cage with green moss at its base and an adorable little bird perched on top. In the words of its creator, it’s “a cocktail so full of happiness that even the bird escapes from its cage.” Fun fact: his mother sends him the birds from Colorado. Can you imagine a drink more full of love than this one?

Double Trouble: the solution to all your problems

When Diego tells a story, his enthusiasm is infectious. In the case of this cocktail, he recounts a time when he was faced with a tough problem, and his father told him: “What one rum can’t do, two can.” That’s what inspired the name of this bold cocktail, which combines white rum with spiced Jamaican rum, lime juice, passion fruit, mango, a splash of soda water, a few finishing touches of cinnamon and a sprig of mint. The interesting presentation of this mixed drink, served in an transparent bag within a tiny shopping cart, has its own origin story, of course: it comes from the Boquería Market in Barcelona, where Diego is a regular customer.  He enjoys talking and sharing recipes and advice with the merchants there, where he found the little metal shopping cart. With the idea for a drink already forming in his head, he asked himself, “what better image to symbolize the trip from the market to the table?” The result: a delicious explosion of flavors that will help you solve all of your problems, transporting you straight to the Caribbean aboard a shopping cart. Bon voyage!

Roll the Dice: customization in a glass

Before this night of cocktails in Barcelona comes to an end, someone notices the last item on the Arola restaurant cocktail menu, enigmatically titled “Roll the Dice.” On Diego’s face you see the playful joy he’s known for. He excuses himself for a second, and returns with two dice.

The most rewarding part of his work is seeing his customers’ faces light up with surprise, so he strives to offer them not just what they want, but what they never knew they desired. With this in mind, the last menu option is not a cocktail, but a game that unlocks the secret choices of the chef. It’s a challenge for the more adventurous guests to explore new tastes and discover the perfect combination of flavors with a wide variety of off-menu creations. The rules are simple: each number on the dice corresponds to a question that Diego will ask, in order to get to know the person on the other side of the bar. Today a four and a one come up, and Diego asks the guest what their favorite season of the year is and how they take their coffee. The answers are “autumn” and “black.” The gears in Diego’s head start turning as he prepares to craft the last drink of the evening.

Do you know about Enoteca Paco Pérez? Mediterranean cuisine with two Michelin stars.

This brand new cocktail is a variation on one of Diego’s most famous drinks, in which he makes use of the bourbon that’s brought him so much joy throughout his career. The cocktail’s orange tint comes from pumpkin puree that Diego cooks himself in the Arola’s restaurant oven, which gives the drink a sweet and creamy quality. He also adds a drop of apple cider essence, a drizzle of anise, nutmeg, cinnamon and panela, a type of brown cane sugar used to sweeten dishes in South American cuisine. This original recipe, served in an Old Fashioned glass, is a sophisticated after-dinner cocktail with a long, drawn-out flavor and all the personality of real American bourbon. A total success, especially for the lucky guest who rolled the dice!

An evening that will leave an unbeatable aftertaste

By the end of the night, it’s impossible to choose just one favorite cocktail. What everyone can agree on, however, is Diego’s magical spontaneity and the exquisite atmosphere he creates around the table. It’s an unforgettable experience, and an absolutely unique way to get acquainted withcocktails in Barcelona. If you want to not only have a drink, but also experience a night of style, creativity and flavor with one of today’s best mixologists, then remember that Diego eagerly awaits your arrival to the Arola bar.