The top 10 places in Barcelona: enjoy the city! 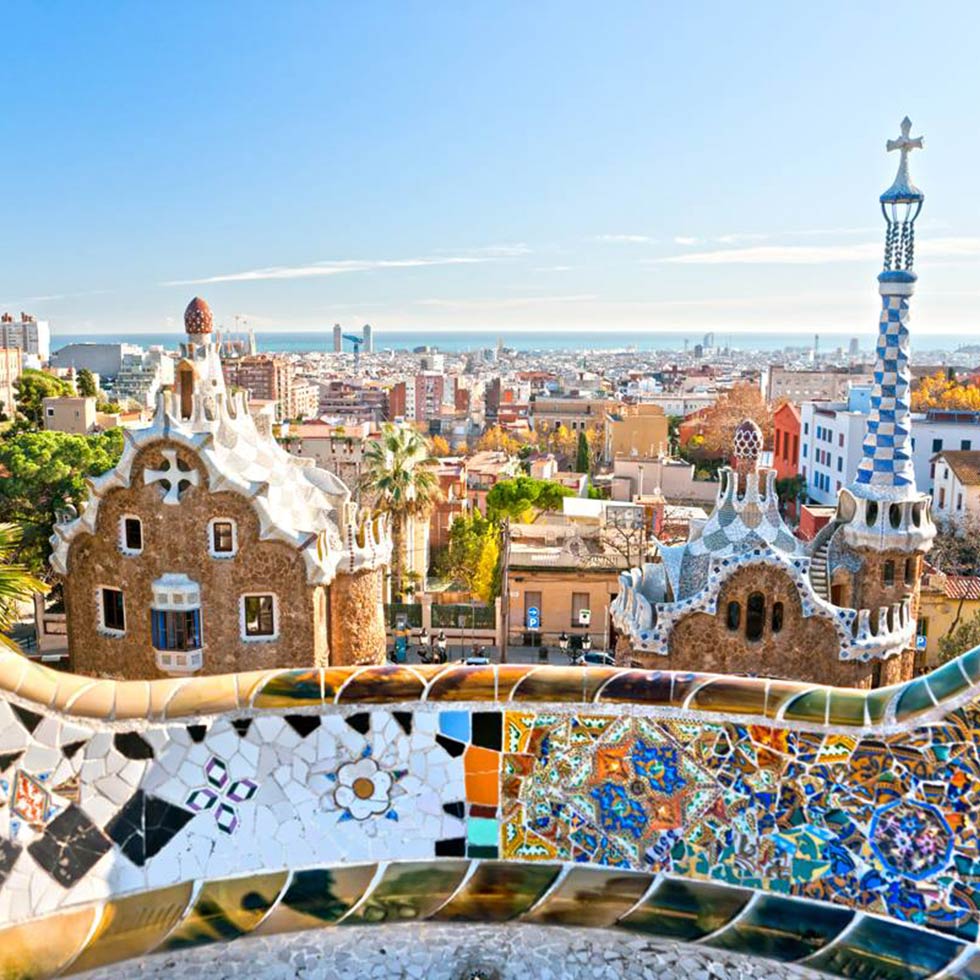 Wondering where to go in Barcelona?

The top 10 places in Barcelona: enjoy the city!

When you mark Barcelona on the map as a holiday destination, you may feel somewhat overwhelmed by the number of tourist attractions the city offers. With that in mind, this guide will take you directly to the essential places. Don’t ask where to go in Barcelona, put your walking shoes on and start experiencing the city!

1. Any place with Gaudí’s footprint

Gaudí is Barcelona and Barcelona is Gaudí. His works have become the city’s most recognisable images, monuments that are a must on your list of places to visit: the Sagrada Familia is perhaps the world’s most famous unfinished basilica and the most impressive example of Catalan modernism. But that’s just where the tour begins. Some of his most notable houses can be found on the Passeig de Gràcia: the Casa Milà or “Pedrera” which shows the architect’s naturalist style through its wrought-iron climbing plants or warrior-shaped chimneys; and the Casa Batlló, inspired by the story of Sant Jordi (Saint George), the legendary knight and patron saint of Catalonia who killed a dragon to save a princess. Indeed, the most characteristic feature of the house is its vault, shaped like a dragon. Parc Güell seems like something out of a fairy tale, full of impossible sculptures, wavy tiled benches representing the sea, and dreamlike spaces. Casa Calvet, Casa Vicens, and the Colonia Güell are other examples of the architectural genius’s overflowing creativity. Don’t miss them!

Welcome to the heart of the city, one of its prettiest areas where you can discover the preserved remnants of early Barcelona. But… what to do in Barcelona’s Gothic Quarter? Walk along La Rambla, a lively stroll full of restaurants and terraces where you can sit and watch people come and go. Fall in love with Santa Maria del Pi, a charming Gothic church. Roam around the original Roman walls in the Plaza del Rei next to the Cathedral of Barcelona, an example of Gothic architecture from the 14th century, the interior of which is a must see. Exiting the cloister will take you to one of the city’s most beautiful and romantic corners, the Plaza Enric Neri and its iconic central fountain. And don’t miss out on visiting jewels such as the Plaça Sant Jaume, the political heart of Barcelona and Catalonia, or the Neoclassical Plaza Real, with palm trees, an ornamental fountain, and lively bars and clubs with live music.

Barcelona breathes art and a good example of this is the quality and quantity of its museums. The Museo Nacional de Arte de Catalunya (MNAC) houses the most representative works of Catalan artistic expression, from Romanesque to modern art. Speaking of modern art, the Museo de Arte Contemporáneo de Barcelona (MACBA) exhibits great avant-garde works by local, national, and international artists. If you are more into the graphic, fashion, or product design scene, the brand new Museo del Diseño is just for you. For those who want to soak up local history, the Museu d’Història de Barcelona (MUHBA) has been promoting historical heritage for decades. You can also play with and learn about science with your family at CosmoCaixa, make your mouth water at the Museo del Chocolate, or visit the homes of some of the most prominent names in the Barcelona art scene such as the Fundació Joan Miró, the Museo Picasso and the Casa Museo Gaudí.

4. The sea: connect with the Mediterranean lifestyle

Since 1992, Barcelona has had an eye on the Mediterranean. It’s hard to turn down swimming, sunbathing, taking a relaxing stroll, or tasting a paella or selection of seafood tapas at a seafront bar. We suggest covering the four kilometres from Port Vell to Rambla de Poblenou, where you will note the advantages of living by the sea. You can enjoy an unbeatable view of the Mediterranean and the Olympic Port from any of the rooms at Hotel Arts, and you can enjoy full comfort and service without leaving this privileged location.

Would you like to enjoy an unforgettable seaside experience with live music, cocktails, and authentic tapas?

5. Music: the best places in Barcelona to pamper your ears

Built in the early 18th century, the Palau de la Música is one of the world’s most special concert halls, the exceptional acoustics of which attract renowned artists every year. Both the building and the stage immerse you in a frenzy of light, colour, architecture and music in which you will experience a concert like never before. And opera lovers can’t leave without visiting the Gran Teatre del Liceu, which has been the stage for history’s greatest operas for more than 150 years, performed by the most famous voices in opera such as Montserrat Caballé, Josep Carreras, Luciano Pavarotti, and Maria Callas. It is a piece of the city’s history, with melodies ranging from desolate passages to epic resurgences from the flames.

It is undeniable that one of the city’s best claims to fame is the century-old club bearing its name. Seeing the world’s best players play in one of the planet’s grandest and most spectacular stadiums is clearly an experience that goes beyond mere sport. The initial whistle sounds, nearly a hundred thousand fans roar in unison, Messi advances with the ball, and … you are there to see it live. You can also visit the museum with an exciting tour of Barça’s history, players, and trophies. FC Barcelona: more than a club!

In Barcelona, Sundays are the new Saturdays. Discover everything on offer

7. Gastronomy: at the forefront of Mediterranean cuisine

Lately, Mediterranean cuisine has experienced a resurgence, driven mainly by national chefs who, with their mixture of high quality raw materials, innovation, and creativity, have placed Barcelona at the top of the culinary map. We’re proud to be a city covered with stars where you can taste creations by the best chefs in an incomparable setting. Among its restaurants, Hotel Arts Barcelona boasts the unique offerings of Enoteca Paco Pérez, with two Michelin stars, in which the purest essence of the Mediterranean is savoured. Added to those are other culinary offers such as the terrace of Lokal, the summer kitchen of Marina, or snacks at any time of the day at Bites. Finger licking good!

8. Fashion: the best places to go shopping in Barcelona

Recently, Barcelona has become the top European destination for shopping, in large part thanks to important shopping areas such as the Passeig de Gràcia, where the showcases of top brands share space with Gaudí’s architecture, Diagonal, a grand promenade able to satisfy the most fervent shoppers, the Rambla Catalunya and its charming luxury boutiques, and Borne, the city’s coolest and most cosmopolitan quarter. Not to mention various shopping centres such as La Roca Village, an entire town made up of luxury brand outlets.

9. Viewing points: what to see in Barcelona? The answer is Barcelona

For restless souls who wish to embrace Barcelona’s beauty at a glance, the best solution is to climb high. Visit some of the city’s numerous viewing points and see it with a bird’s eye view.

The iconic image of Barcelona reaching towards the sea at the Mirador de Sarrià; the Turó de la Rovira, a magical place to watch the sunset in good company; the multi-layered terraces at the Mirador de l’Alcalde; the Torre de Collserola, the city’s highest point, or the Turó de les Tres Creus, to enjoy Barcelona from the Parc Güell through Gaudí’s eyes. Let’s not forget the 44 floors at Hotel Arts and the rooms’ impressive circular panoramic views of the Mediterranean Sea and the city.

10. Hotel Arts: your home in Barcelona

The last recommendation on this list takes care of your comfort and well-being. When you travel to destinations with so many things to do and places to go, accommodation becomes a vital decision to ensure your rest and proximity to tourist attractions. Hotel Arts rises above the seafront, surrounded by breathtaking panoramic views, a stone’s throw from the Gothic Quarter, the Palau de la Música, and the Liceu, with one of the best Michelin-starred restaurants in Barcelona and special promotions that turn shopping into a special experience. If you’re asking yourself where to go in Barcelona, the first response should be the comfort and experience at one of the city’s most luxurious hotels. See you soon!